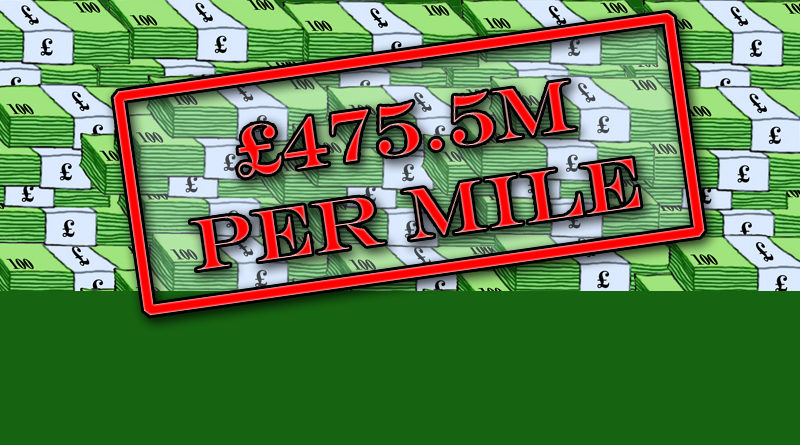 Since the Spring Budget 2020 we have published an updated version of this article which can be found at – www.thamescrossingactiongroup.com/estimated-cost-per-mile-update/

We all know what the true costs are to our lives, homes, communities, green belt, ancient forests, agricultural land, wildlife, countryside etc.  What about the cost in figures! What is the estimated cost per mile of LTC?

One thing that is noticeable by it’s absence in the latest documents that form the LTC Supplementary Consultation is any mention of the estimated cost.

We emailed Highways England to ask for clarification of the current estimated cost of the proposed Lower Thames Crossing.  We now have a reply stating “We estimate that the project will cost between £5.3bn and £6.8bn. However, as the design develops we will have more certainty of the costs. We will let you know of any changes as they occur.”

We all know that these projects never run to budget, but lets be kind and work out the figures based on LTC costing £6.8bn. The current design states it is approx 14.3 miles long.

So the Lower Thames Crossing (at current estimates) would cost just over £475.5m per mile.

Let that sink in………..Four hundred and seventy five and a half million pounds per mile.

Do we consider that to be good value for money?  Spending such a huge amount of taxpayers money on a project that creates a hugely destructive toxic triangle that doesn’t solve the problems we all suffer with due to the Dartford Crossing, which will still remain over capacity even if LTC goes ahead.

The answer is of course NO! 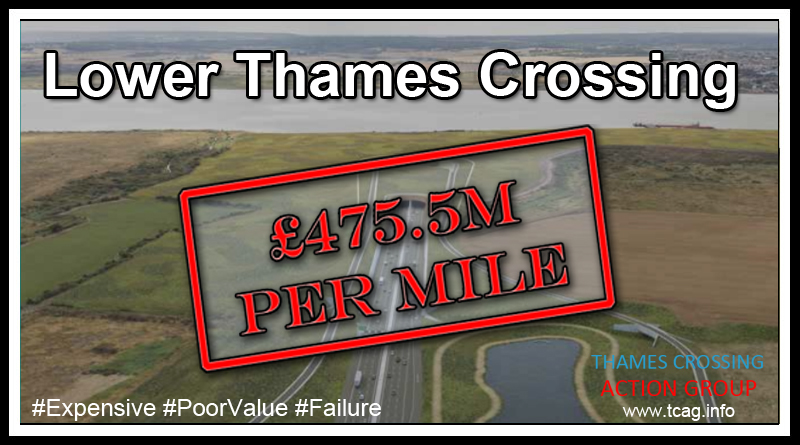 Comparing the cost per mile

There has of course been a lot of recent press attention over the cost of another hugely destructive Government project HS2.  How do the two projects compare mile for mile on cost?

Latest figure and articles suggest that HS2 costs is £307m per mile of track, as stated in a recent article in the Guardian – www.theguardian.com/uk-news/2020/feb/03/at-307m-per-mile-of-track-can-the-cost-of-hs2-be-justified.

It should also be taken into account that as part of the Supplementary Consultation updates in 2020 it has been announced that the Service Station that had been added in 2018 (due to Government guidelines on providing rest areas for safety reasons) has now been removed. However, Highways England also state “Highways England will be working with service area operators, the haulage industry and road user groups to consider the most appropriate location for any further service area provision on the Strategic Road Network. Any facility proposed in the future would need planning consent from the local planning authority.” – Overview – Section 3b: Changes to the route – North of the river in Thurrock and Essex.

Is this just another way to reduce the overal cost of LTC, to improve the cost benefit ratio to try and get this passed, whilst all along planning on adding a service station as a separate standalone project?

The same can be said about the removal of the Tilbury Junction and Tilbury Link Rd.  It has been reported that Highways England, the Port of Tilbury, and Thurrock Council are in discussions regarding the Tilbury Link Rd as a separate standalone project also.  Is this yet another way to keep costs down under the LTC project budget, whilst still discussing now removed sections of the LTC scheme as separate projects?

Or the fact that the 2 lane bottleneck on the LTC between the M25 and A13 southbound that will no doubt need upgrading as soon as it is realised, as we all know now, that 5 lanes of M25 traffic won’t fit into 2 lanes on the LTC southbound when there is an incident at the Dartford Crossing/M25, and traffic needs to migrate to the LTC southbound!  Surely not another example of false economy?!

We would definitely say it appears to be the case!  What would the true cost of LTC be if they had to include these standalone projects?

Question 1c and 1d is where you need to make any comments relating to the Service Station and Tilbury Junction. Questions 8 in the Consultation Response Form allows for comments on anything not specifically themed in the other sections should you wish to comment on this point in your response.  Please do NOT copy and paste any of the above as your response.  Please use your own words, to avoid any confusion that you wish your comments to be considered an individual response. Copying and pasting could risk your response being considered a campaign response.

If you wish to also express your concern specifically about the estimated cost of the proposed Lower Thames Crossing you might want to consider also contacting the following:

Stephen Metcalfe MP (South Basildon and East Thurrock) also spoke to the then Chancellor Sajid Javid about cost of LTC back in Sept 2019 – read our update on that here – www.thamescrossingactiongroup.com/stephen-metcalfe-asks-chancellor-if-lower-thames-crossing-is-value-for-money/.